10. Shiver of Sharks!
Sharks produced a shiver
As they circled for their dinner
Gobbling up the little fish that came to school
Fascinations
Sharks do not have bones but they do have rows and rows of sharp teeth that continually move to the front row.  Once there, they only have about 10 days of life before they are shed or fall out during dinner!  If you were to be so foolish as to attempt to stroke a shark you would discover its skin feels rough like sandpaper.  Should you come face to face with this deadly predator our advice is to flip it on its back where it will promptly enter a trance-like state allowing you to swim away to safety!
Musicking
Think about how our mouths and teeth are important to communication - how many creatures can you think of that smile?  Open mouths wide to stretch facial muscles, then smile showing your teeth like a shark who has spotted its dinner.  Begin in a relaxed style and practise making sweet vowel sounds on la-(zy) and a-(zure). When this is secure and going swimmingly, introduce doubt into everyone’s minds with the second part which outlines the bass part of the accompaniment.  From bar 19 enjoy singing in the minor key, which is often used to evoke scary feelings.  There are two tunes to get to grips with:Part 1 starts low and swims its way up while Part 2 starts high and floats its way down.  Listen out for sharps and sing with ‘fin’-esse and cutting-edge accuracy.  Experiment with percussion instruments suitable to animate this section and build up for the dramatic ending with a trill (or shake!) on the final note. 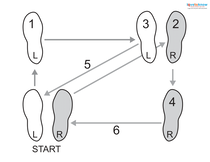 Learning moves
Performance etiquette for sharks
‘Look! There’s a shiver of sharks’ is not a casual observation - it is only ever screamed by swimmers and this song and game is not for the faint-hearted.
Playing the game Shiver of sharks involves everyone swimming around in a school of  fish except for one person who is chosen to be Sharkie.  Rather like tag, the objective is for Sharkie to catch the rest of the fish and as the shiver of sharks grows so the school of fish diminishes until there is a solitary Minnow remaining.  Before Minnow is gobbled up they should be declared the winner!